The pax rolled-in as Ripken and YHC finished a nice little 3-mile pre-run. One pax was even kind enough to offer us a lift, but we graciously declined. YHC has made it a life practice to stay out of all vehicles that have pigs as drivers. It never fails, if I don’t, you can bet my bacon is pretty much cooked. Hey, I was young once and needed the money. Anyway, it was a nice gesture, Sniper. SOOEE!!

At 0515, YHC shared the disclaimer  and the 5 Core Principles, then led the pax on a 3-lap mosey, then down the little dog park path and over to the basketball court for a nice little Circle of Pain.

The pax circled-up and the following warm-ups commenced:

The pace of the warm-ups were noticeably quick and served as a nice prelude to what was to come. One Pax was overheard saying, “okay, you win” before the CoP was finished. Maybe he was playing pin-the-tail-on-Miss Piggy with his neighbor, but only he knows. Nevertheless, it was clear that a morning spent watching Porkies Revenge would have been more to the pax’s liking, but hamhocks are 20-20.

At one point, YHC thought I caught a shadowy glimpse of a stray Cat-n-the-hat like character juggling green eggs and ham in the moon-kissed wilderness, but maybe it was just Ripken looking for a nice place to spill the fat later, if required. If only the ensuing beatdown more closely resembled a fun kid’s book, then maybe fits of care-free laughter might have been in the offing for the herd — nothing could be further from the truth. Well, this gloom, there would be no laughing, only 12 little piggies wee-wee-weeing all the way home. Ominous glowing cones tucked along the wilderness trail could be seen by every wondering eye. Holy pig-tails, what could it all mean?

Sooee (pronounced sue-EE) — what farmers call to get their pigs back into their sties. Yes, with temps in the 80’s and humidity in the 90’s, thoughts of endless Florida summers captivate all. So, a beatdown resembling the seemingly never-ending, relentless Florida summers was all that YHC could conjure for the gloom. Endless Summer Sooee-cides seemed perfectly tailored for this not-so-good-of-a morning. 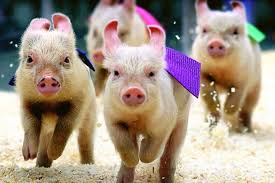 The ensuing sooee-cide beat-down involved a trail marked-out to just over 400-meters. The stinking swine had to race to the 400-meter turn-around and then back to the start for a total of one-half-mile (i.e., roughly 800 meters). The glowing cones marked the start line, a mid-point about 200-meters out and the turn-around at 400-meters. The mid-point and turn-around glowing cones represented stations where 5-burpees had to be executed by each passer-by before continuing on.

The overall sooee-cide objective was simple, once one little piggie made it to the 400-meter turn-around point and completed the requisite 5-burpees, he then yelled “SOOEE” loud enough to inform all the other hapless hogs that Mr. Piggy was on his way back to his stie (i.e., start line). Once sooee was yelled, every pax stopped where they were and immediately turned-around and slogged their way back to the start, not neglecting the required 5-burpees at the midpoint (if they even made it that far).

Any piglet that got beat racing back to the start by Mr. Piggy was rewarded with traditional suicides on the basketball court (see below). If Mr. Piggy was beaten by all pax, then everyone endured the additional suicides because YHC considered this a case where everyone must have sandbagged. Luckily, Mr. Piggy hogtied at least one sow in each of the four ensuing half-milers.

As for the basketball court suicides, those who finished ahead of Mr. Piggy were rewarded with complete rest (well, more like bent-over chest heaving) while the sorry hogwarts beaten by Mr. Piggy were given only about 20-seconds rest and then they endured the additional pain of length-wise, traditional basketball court suicides starting at the near baseline then running to near free throw line and back, mid-court and back, far free throw line and back, and finally the far baseline and back. Approximately another 20-seconds of rest was granted as each pax made their way back to the start line for another round of half-mile Sooee-cides. This was repeated a total of four times. YHC, continued to remind the pax that pacing is key, the return portion of the race had to be run faster (i.e., negative splits) than the outgoing portion to avoid the blessing of traditional suicides.

In the end, Endless Summer Sooee-cides were a not-so-friendly reminder of the next five months of Florida summer’s relentless presence. From what YHC could tell, no one spilled the fat, but there’s no doubt the grease was close for a few pax. It was a tough beatdown, not much mumble chatter, not much anything except heavy breathing and lots of sweat. Not bad for an F3Nation Monday morning. Congratulations to YHC, Sniper, Bing and Pincher for achieving Mr. Piggy status and beating some pax back to the stie.

After the final round of traditional suicides, back to the parking lot we strolled for a CoT.

The Moleskin – Any man can run a short race, but a long race takes heart. As servants of Sky-Q, we have been given the grace to endure, to pace a life of longevity for the Lord. We don’t have to fizzle-out after 10-minutes serving the Lord with great zeal, only to disappear from His service for weeks, months and even years. We have been called and equipped to go the distance and live a life of purpose and meaning, a life that matters. When the journey gets tough, we know it’s all about pace and patience. Eventually, the finish line approaches and we can take comfort knowing we “ran the race with endurance” and will receive an imperishable crown. Be blessed, my F3 brothers, for the joy set before you (as it was Christ) endure with confidence the race marked-out for you.