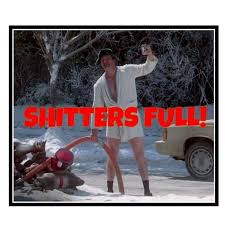 Welcome: After a quick Monopoly Board setup around the outside perimeter of astro-turf square, YHC greeted the pax with the 5 core principles and obligatory disclaimer and away we went for a mosey, followed by SSH x10 IC, Strawberry Pickers x10 IC and Mtn Climbers X10 IC. To conserve as much time as possible, YHC went straight into the Thang.

The Thang: Inspired by a lyric in Metallica’s Master of Puppets, YHC thought it good to bring fun to the pax — PAIN Monopoly.

YHC created cards for every space in the game Monopoly, complete with actual name and dollar amount to purchase said property. Additionally, YHC created cards with various exercises and coupled those with each property on the “board”. For example, Baltic Avenue costs $60 in the game, so in Pain Monopoly, when a team landed on it for the first time they could “purchase” it by doing 60 reps of whatever exercise was listed. Only one person on the team had to get to the 60-reps, but that person could only be the first pax one time until the team passed GO! Once past GO!, they could be the first one done again. Boardwalk cost 400 overhead claps and Tennessee Avenue was 180 heels to heaven, and so on.

Once a property was paid for, that team picked up the property card and kept it with them the rest of the beatdown, leaving the exercise card behind. The goal was to be the team with the most reps by purchasing properties along the way. Two yard dice were provided to each team to dictate how far they could go on a given turn. Modes of transportation were to be bearcrawl, broad jump or crabwalks. There was lots of modifying here.

Speaking of Ritual Misery, one thing that YHC didn’t plan for was the shitter truck (some claim it was a grease trap cleaning truck, but that’s highly debatable). Apparently, the restaurants around here have some serious e-coli problems. The stench from the truck was so nasty that Stagecoach lost his breakfast, but lived to tell about it. Papa Smurf made so many gag noises, YHC thought for sure he was going down for the count. The Truck was parked upwind of the Pain Monopoly board FOR THE ENTIRE BEATDOWN!! It’s almost as if someone was playing a PSYOP (Psychological Operation) on the pax. The mumble chatter was very thick regarding said shitter truck, almost as thick as whatever shitter truck guys was sucking out of those manholes. This was only after the street sweeper guy made 14 trips up-and-down the same 3 parking lanes, nearly gobbling-up all my monopoly spaces! Not even one cigarette butt on those roads, yet it got 14x the cleaning it needed.