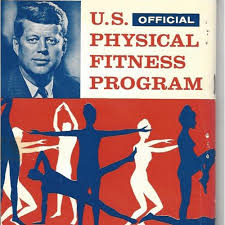 The idea? Recreate the classic JFK Presidential Fitness Curriculum from 1961. This fitness program was JFK’s idea for the Cold War, when Americans were getting soft, and Kennedy believed that it was a civic duty for the nation to be fit. His idea was to get the winning (and popular) Oklahoma football coach Bud Wilkinson to direct the publication of a booklet and program to get Americans in shape. It was called a “program for all that takes only a few minutes a day.”

The program included a promotional video, and a series of exercises, some designed for men, and women, and on five different fitness levels. The program was divided into Orientation (basically a warmup), Circulation (ie bodily circulation) and Conditioning (what we call THE THANG.) The program also revived Teddy Roosevelt’s 50 mile walk. His idea was that Marines needed to be able to walk 50 miles in 20 hours.

The idea behind the program was this:

After World War II, many Americans worried that US citizens, especially the young, were growing overweight and out of shape. The nation’s economy had changed dramatically, and with it the nature of work and recreation changed. Mechanization had taken many farmers out of the fields and much of the physical labor out of farm work. Fewer factory jobs demanded heavy labor. Television required watching rather than doing. Americans were beginning to confront a new image of themselves and their country, and they did not always like what they saw.

Kennedy had high aspirations for the program. But it was not a mandate or a government requirement. Instead, he was more subtle. Papa Smurf read from JFK’s introductory letter:

Ours is not a regimented society where men are forced to live their lives in the interest of the state. We are, all of us, as free to direct the activities of our bodies as we are to pursue the ojbects of our thought. But if we are to retain this freedom, for ourselves and for generations yet to come, then we must be willing to work for those physical qualities upon which the courage and intelligence and skill of man so largely depend.

The need for increased attention to physical fitness is clearly established. The Government cannot compel us to act, but freedom demands it. A nation is merely the sum of all its citizens, and its strength energy and resourcefulness can be no greater than theirs.

We went one mile running down Cattleman, before our warmup exercises. This was before our warmup. In the original 1962 workout it was called a “jog run” and the running was about improving the circulation in our bodies.

There was also a warmup. They called it “Orientation” and it roughly corresponds to the warmup circle. We did the following:

We divided into three groups, only because I had three jumpropes.

The original program had five levels of fitness for each sex. One could increase the program as you improved your fitness. I picked the fourth one, called Conditioning Exercises Level IV, in the interest of time. Each actually pretty much corresponded to an F3 exercise. Each pax had to do each exercise. They were (F3 name in parentheses):

We concluded with a walk up the tower. The Presidential Commission thought this was the best exercise there was. As pax walked up the tower, Smurf read the importance of walking:

Walking is actually one of the best all-round physical activities. The massaging action the leg muscles exert on the veins as you walk improves the flow of blood back to the hear, when you walk you’re improving not only your leg muscles but also the pumping action they provide walking costs nothing; there are many possible daily opportunities for it, and it can be enjoyable. Develop a brisk step, breathe deeply, swing your arms.

Allow extra time to get to the train, to the store, to meetings, other places you have to go so you can, at least now and then, by footpower.

On an occasional weekend, plan walking as a family enterprise. Set a goal; take a walking tour to a park, other scenic spot, or some place of historical interest. Whenever possible adult men and women should join physical fitness groups conducted under professional supervision. Such classes are available at local clubs, churches, schools, colleges, community recreation centers, and at the Y’s and other voluntary agencies.

Prayers went out for the Savage Race tomorrow, Snapshots sister and brother in law, Jay, Grow Ruck safety and Jeff’s M and family, who died Wednesday at a youth sports event.

Over and out. Those interested can see the following films and PDFs: