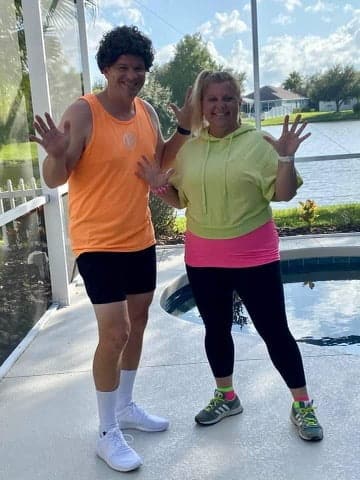 Saturday’s beatdown started sticky and got stickier.  We had 2 cameo appearances by Pax trying to get their names in the backblast, but I agreed not to mentioned Defib or Recall’s name since they just ran by and did family photos in the vicinity. You’ll have to try and figure out which of them was running and which was taking pictures.

After the 5 core principles, we noted that today was in memory of Hightower.  Not only a fallen pax, but a fallen police officer taken during a seemingly normal domestic dispute call.

Our mozy was a bit longer and the circle of pain began with no sweat dripping of Pincher’s nose yet.  That’s how we knew it was time to turn up the heat a bit more.  After some SSH, LBC and CDD’s, we did some Grady Corn’s.  Grady Pitstick “aka Quikcrete” is another pax that was lost last year at the young age of 30.  He brought this little gem to the pax.  A Grady Corn starts with your arms out in a “T”, taking them up like an “I” and then back to a “T”.  Then move them to a front clap and back to a “T”.  This can be done in a 4 count.  Grady said 25 is the minimum, at 50 the mumble chatter stops, and 75 you’re dying and if you make it to 100, you da’ man.  We started with 50.

We then did an Indigenous American Person run to the lake.  At the lake we circled up for about 20 minutes of kick boxing.  This went from low to high cardio.  All were in a flop-sweat, and all will know what their Teres major and Teres minor muscles are.  That’s the little muscles that are killing you in your back thanks to all the punching.  You’re welcome.

After another IAP run back to the Echo Chamber, we thought we’d do a Bruce Lee.  Mr. Lee is noted to have done 7 sets of 5 ab exercises for 90 reps each, daily (hard to imagine that level of self-torture).  Our goal was 3 sets of 20.  We finished one and had to stop due to time.

The last 15 minutes were allocated to Hightower.  All pax across the country were doing a series of exercises (now known as the Hightower) in his honor.  Modeled from the verse Matthew 5:9.  “Blessed are the peacemakers for they are children of God.”

We had a couple minutes left which were dedicated to Mary and her round of thugs.

Prayers for Hightower’s family, our country and our first responders.  Prayers/thanks for Lancelot’s feet and leadership.  Prayers for my kids as my wife is out of town.