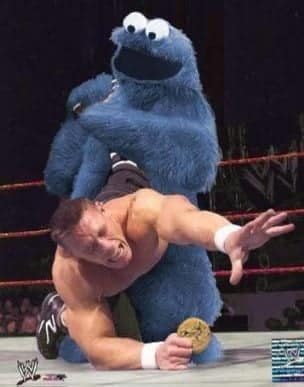 No one grabbed the Q- Ripken put out the warning on Slack, Goob echoed the sentiments, and both arrived to beat down the PAX.  Since no one signed up, those brave souls would deal with Goob’s rerun and mashup.  But first, the 5 core principles were shared.  The message was simple, sign up for a Q or suffer the consequences.

The mozy was one lap around the parking lot with butt kickers, high knees, side shuffles each direction, and a NUR.  The Pax then circled up to perform SSH, Strawberry Pickers, a stretch down both legs, arm circles, Michael Phelps, and agitators.  From there Goob reiterated that immense pain would follow as a result of no Q.

In an ode to Ripken’s Friday Q, Goob took the Pax across the street to the soon to be Christmas Tree Trail.  Ripken told Goob that he was certain the “chalk had washed away”.  Goob channeled his inner Doc Brown from Back to the Future and said, “where we’re going, we don’t need (chalk)”.  All Pax were then instructed to run the distance of 2 trees and perform 10 burpees.  Stand up, repeat.  This would not end until the path ran out of trees.  The mumble chatter quickly disappeared and was replaced by gasps for air.  100 burpees were performed before we ran out of trees.  Once complete, we ran back to the beginning of the path and planked it up for the six.

Once all ten of us were accompanied for, we ran to the base of the tower to rerun Goob’s beatdown from last Monday AND Tuesday.  As a refresher, 3 exercises of 25 reps each, and a tower run at the end.  Repeat with a long run.  The exercises-

Fortunately for all, the clock ticked 6am.  At the COT, the message was relayed- step up and Q.  If one is nervous about Q’ing for the first time (the VQ), Goob encouraged the group to ask for help.  Co-Q’s are an option.  Message delivered and mass quantities of sweat were deposited into better versions of ourselves.  We also had Kotter back in the fold along with Sully, Ripken’s brother-in-law hanging with us.  (They aren’t in the names list above)