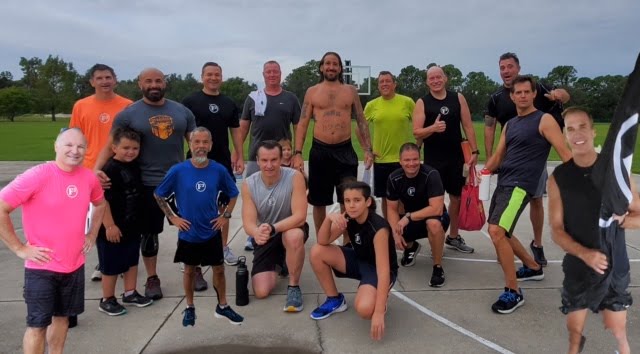 At exactly 7:00 am, on a comfortable low 70’s Saturday morning we started by covering the 5 Core principals and welcoming Silver Bullet to his first in-person beatdown.  This was followed by a Mosey around the parking lot that included butt kickers, high knees, karaoke to the right, and left, as well as a nur.

We then took the workout down to the basketball court and circled up for some warm-ups and stretching.  We started with a 10 count each, in cadence, of side-straddle hops, strawberry pickers, Michael Phelps, and Agitators.  Followed by stretching of bilateral hamstrings, quadriceps, hip flexors, and hip adductors.

The Work-out started with Six Minutes of Mary including a 15 count, in cadence, of each of the following exercises:

We then broke up into 4 groups and spread out into 4 different stations on the basketball court and performed the following exercises for 1 minute each, followed by another Lobstaah Roll and a short run, before moving to the next station.

German – Arms up and down (Temper Tantrums)

We finished at exactly 8:00 and the PAX were extremely disappointed that we ran out of time to perform one more Lobstaah Roll.  They will have to wait until my next Q.

Give 2 Give campaign has started.

Walk for Alzheimer’s on November 21st.  See Rowdy or Manziel for further information.

Rowdy has an upcoming Jambalaya Fundraiser.

Please be respectful of others at all AO’s.

Drake was very thankful that he was finally able to see his Mother.

For Drakes Father-in-Law and M

For our Nation’s First Responders and Healthcare Workers dealing with all of the current challenges.

For our President, First Lady, and everyone around the world fighting COVID.

For the Country during this contentious election season.