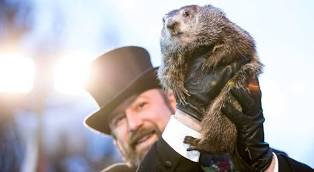 Groundhog Day started as usual with 2 of the 3 S’s for Ripken, no shower needed as of yet; the 1st S was glorious.  Soon after it went stupid.

Five hearty pax arrived to hear Ripken bark the usual mission, core values and disclaimer.  The mozy was very impromptu with a trip to two parking lots where grease traps and garbage dumpsters were more inimical than not.  No one would choose to copulate here!

Because January was full of burpees, it was noted that we would not be doing burpees.  Instead we would do the “PHIL” workout, not in honor of Phil Conway, but in honor of Punxsutawney Phil.  It consisted of…

Hurpees – a non-burpee + 4 hillbilly walkers in the middle. Goob said this reminded him of his sophomore year at UNC.

For each exercise, we ran to the opposite sidewalk, did said exercise and returned.  Upon return either 50 or 100 SSH’s were dealt. Fireball had an ouchy on his knee so he did some Jane Fonda moves instead.  Manziel jeered joyously at the juxtaposition of the junior journeyman.

Since it was GHog day, we did it twice….of course.  With a little time to spare, we finished off our shoulders with a round of Grady Corns to 100.  Lovely.  Looks like Pincher’s swim workout was going to be a kick board routine instead.

Announcements: Wildpax 2030 is just around the corner.  Sign up soon.