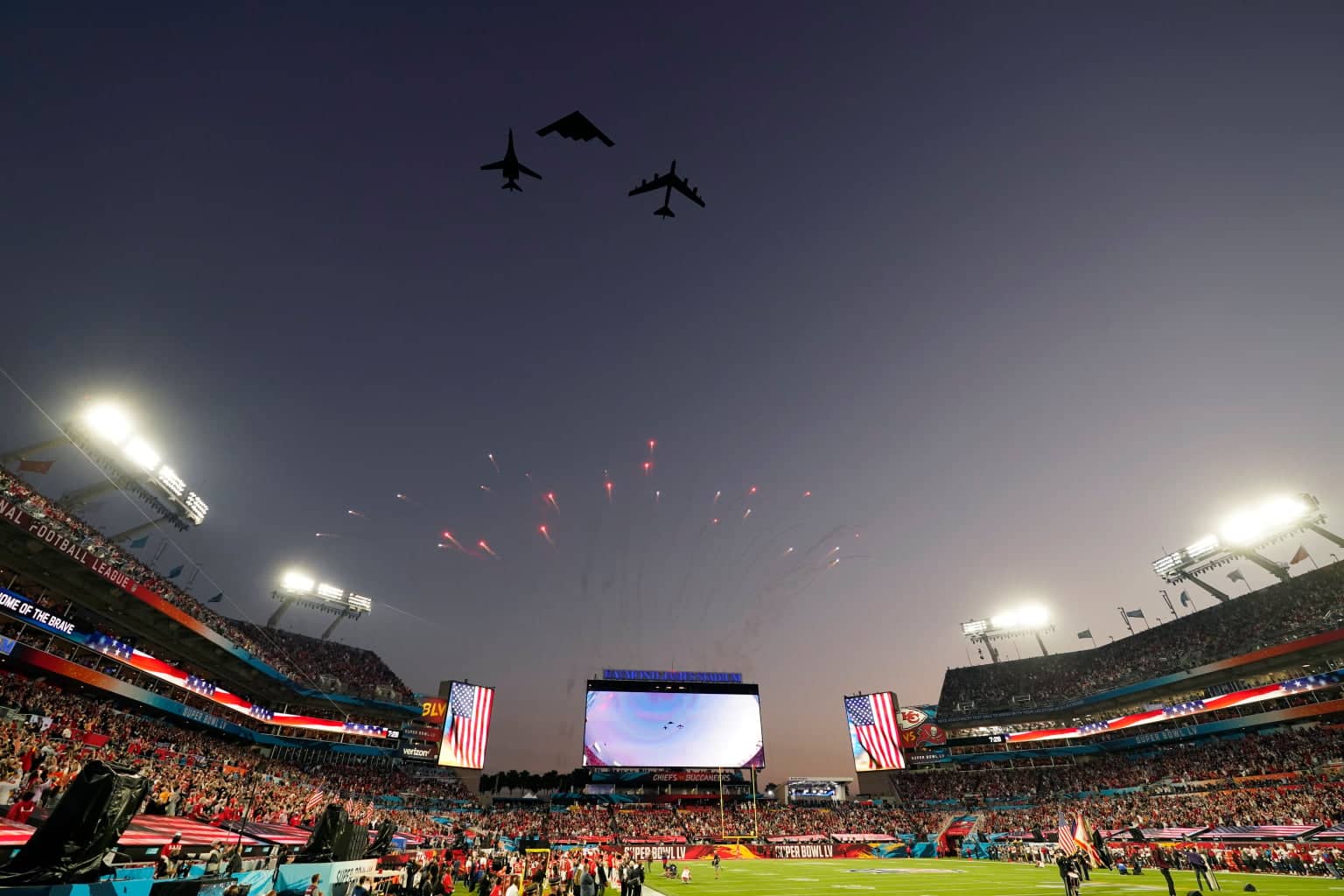 YHC rolled into the lot at AP at 5:05 to see no cars.  Could it be that everyone fartsacked after a Tampa Buccaneers Superbowl win?  Thankfully the lot lit up with 6 more cars and we were ready to accelerate!!

Core Principles were POORLY recited by YHC, so redemption was had with a flawless reciting of the mission statement and disclaimer and we were off for a 3 lap mosey that included Butt kickers, carioca x2, high knees and mumble chatter about the military fly-over that took place last night (and flew over Goobs house apparently – thankfully he was at his BBQ and got to witness it.  It was noted that the fly-over jets added up to 55 – a B52 Bomber, B-1b and B22 bombers.  Also deemed a perfect trifecta.  Learn more here: Perfect Trifecta

Much to the dismay of the pax, they were used as guinea pigs this morning on an exercise recently submitted to the exicon – the Bearcrawl Indian run.  Somewhat similar to Catch Me If You Can, pax line up single file and begin to bearcrawl in line- last pax in the line does 5 burpees and then runs to the front of the line, tapping the last pax in line to begin his burpees.  The pax completed the Indian BearCrawl run with everyone cycling through their burpees.  Up next was a modification, called Crabwalk Indian run – with 10 LBCs at the end of the line.  Much mumble chatter with this, especially as we ventured through some painful asphalt and splintered wood on the ground.

Another test exercise – the bear hold.  Similar to plank position, but with your legs bent under you.  We held this for a moment and then began bear hold shoulder taps – x10 IC.

Next up was the real Catch Me If You Can.  Pax partnered up.  Partner 1 started with exercises while pax 2 ran at about 60%.  Once completed with the exercises, pax 1 sprints to catch Pax 2, who then starts his exercises.  Each pax will complete 4 rounds of exercises. First was 10x merkins (completed 4x per pax).  Second round included 10x LBCs x4 rounds.  Lots of mumble chatter as we completed the final round.

Next up was a Dora.  Same partners and a very short run to keep the intensity up.

A threat of one more rounds of Bearcrawl Indian Run caused a lot of hatred towards YHC…so we opted for a quick round of mary including Crunchy Frogs and Captan Thors…and thankfully time ran out!

YHC admittedly disliked Tom Brady when he was in New England, but hearing many reports that he INSPIRES GREATNESS FROM ALL HIS TEAMMATES gave me pause to realize the he is not the guy I thought he was in New England.  To come to an average football team and inspire his teammates to perform at a higher level was impressive.  To have a legacy of inspiring greatness from all his teammates is mighty respectable.  That being said, if he really wants to be the GOAT, he should go to my team and see if he can take them to the SuperBowl next year!! Go Lions!

Always an honor to lead this great group of men!