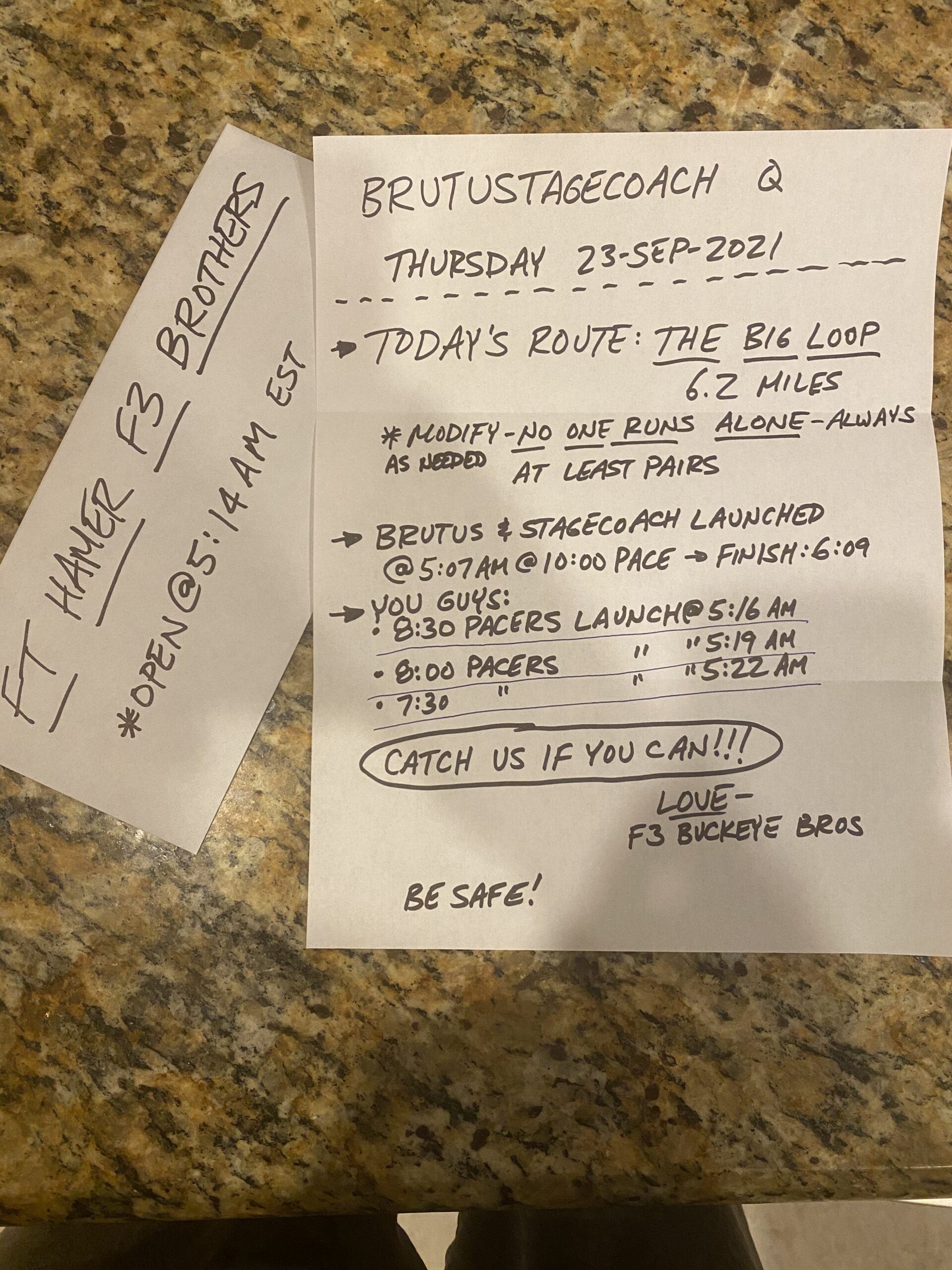 Brutus and Stagecoach grabbed this Q as a result of our August 26 attendance (our committed monthly visit for the month of August) at the Fort and unrelenting (and justified) ridicule about YHC’s commitment to being ready to run the big loop again … but not until December.  I haven’t been ridiculed like that since, well… hmmm only my therapist knows about that event. Thank the Lord for HIPAA regulations; no one will ever know about that….

Our secret plan was a big 3:44 to the Fort regular “runners” that we’d suck it up and git r dun well ahead of YHC’s schedule to do the loop in December. And we added a twist.

Knowing YHC’s diminishing physical condition heading toward the pine box of eternal life and inability to deal with the heat of the SW FL summer, as well as this being Stagecoach’s initial foray into 10K-dom, we figured we’d be around 10:00 pace.

YHC, with a mechanical engineering degree from the THE Ohio State University (6 of the best years of my life, BTW) did some quick math and determined that the “REAL” Ft Hamer runners would get a 10 minute nap before YHC and Stagecoach finished. What to do?  Alas, how about a handicap?

YHC can do basic math, so a table of start times was developed so that, in theory, and if executed properly, would result in ALL runners finishing at the same time.  Since Ft Hamer runs typically end about 6:10, YHC and Stagecoach would need to launch at 5:07AM. But what about all of the other pax who start later?

Solution: a “love letter” (thanks Bing) to the runners posting – sealed envelope under the windshield wiper of the Jeep per picture stating that YHC and Stagecoach had launched at 5:07, and that participating pax would need to determine their intended pace and launch at the pre-determined time for a simultaneous finish. Or, exceed your target time and catch YHC and Stagecoach “catch us if you can”. Pace and launch times as follows:

YHC and Stagecoach ran a very steady 9:30 pace.  Spinal Tap was the first to catch YHC at mile 5 / at “the sign”, with negative splits and a 7:37 pace.  Pincher then passed YHC after the fountain on his way to a “taper” PR @ 8:10 pace. Bing, Fireball, Bladerunner Defib and Goob all finished with 8:30ish pace. Defib got in some EC @ 10+ miles. YHC didn’t see Defib and Goob for a while after finishing; they were probably off somewhere seeing who had the lowest body fat.

Most rules established in the love letter were completely ignored – there were solo runners and everyone launched at 5:15 anyhow.  Not surprising with this group. apologies for not being there to recite the 5 F3 core principles. Had there been an FNG, I’m sure one of the pax would’ve picked him up.

But — baselines have been established in terms of paces for each pax. We’ll do this again with faster pace targets. And y’all will need to follow the flipping rules.

Prayers / around the horn:

Pincher: his M and all M’s

Defib: appreciation for the M in sharing preaching

Thanks to the pax for continuing to push YHC – we all need a kick in the pants occasionally to see how far we can take “this” – thanks for planting your Hokas firmly on my backside on August 26. Kudos to Stagecoach for going WWAAYYYY outside his comfort zone. Dude’s a runner now!