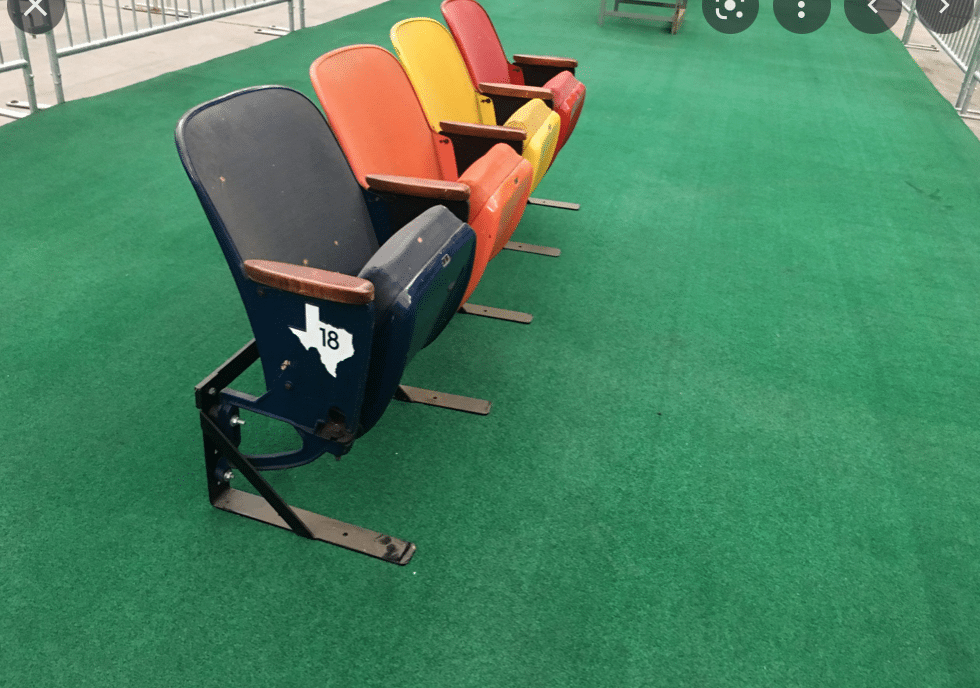 While the NBP tower was great, we really haven’t been able to use the tower for a year or more.  With the recent politics around it and Dilliards’, I hope “AstroZone” is our new home for Tuesdays and Fridays.  Apparently there will be one day a quarter that will need an audible, if we happen to be there when Grease Truck decides to come. Either that or we can all just be bulimic for the morning, like Stagecoach.

The turf was perfect, we used the chairs as coupons, and the lighting strung above was just enough to see, but not be obnoxious.  We used some of the walls on the buildings to our advantage and even the stage got used for some step-ups.  Best of all, the Burpees, LBCs and American Hammers were delightful on the soft surface.  Even running to and fro was pleasant.  Based on the slope of the turf, I would guess there is drainage underneath for when the rainy season comes as well.

After the MS and 5CP, we proceeded to do a mozy, but first each Pax received a tennis ball to keep with them for the entirety.  All movements required constant squeezing of the ball.  It didn’t take long to have your forearms screaming.  The mozy abruptly stopped for some in fielding drills against the wall by Golf Galaxy.  We continued to mozy and squeeze all the way back to the turf.

The next foray was a series of slalom runs through the chairs with 5 burpees at the end of each lap.  We did 5 laps.

We then took turns carrying 105# of dumbbells while the other 4 Pax threw/caught balls against the chairs, squeezing and squatting between each catch. Again, forearms were smoked.

We did one more slalom run, but with step-ups this time.  Lastly, we did a 7 from one end of AstroZone to the other with Burpees on one end and LBC’s on the other.

Announcements: St. Anthony’s triathlon went well.  Bing didn’t finish, but saved a girl from drowning. Praises he was slow enough to be there when she needed him.  Proof that a lack of training has its benefits!  The Beach CSAUP is coming up on 5/14 with Brutus as the cadre extraordinaire.  Family Beach Day is on June 18 with Pyro taking the lead….and of course, Wildpax 2022!!!  A new book study led by Papa Smurf starting tomorrow at University Corner.  New Bible study starting this Friday at Maple Street at 6:30.  This week is just to lay out the framework.  Weather permitting, we’ll sit outside.  If not, we’ll find a corner.