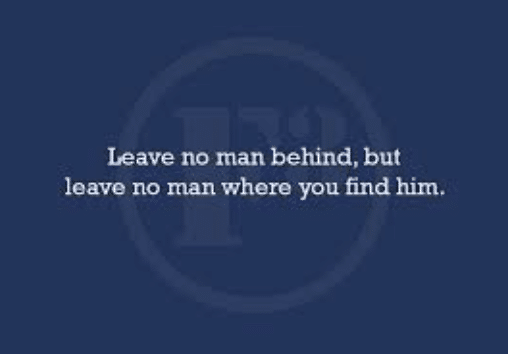 To get the actual BB portion out of the way…

Some Pax showed early for EC, Some for the 5:15 AO Launch, and some launched OYO. In all it was the largest cycling showing to date for the “Friday NBP Cycling” Ripken I think was the earliest for some EC, then Sniper and JD. Cottontail, SmartyPaints, Pudge, and YHC all got 1 lap in together of EC. Ripken was originally there to start that EC loop but got side tracked with a flat before we even left the lot. He was quick to rejoin us as we circled back for the official 5:15 launch, Sniper and Jimmy Dean did some OYO. The Pax split up during the loops, which is ok as long as we start together and never leave a 6 behind. Distances ranged from around 15-24 miles.

Now for the “worth a read” portion:

YHC join F3 for the M and 2.0’s, and at first the intention of being at F3 was just to get into better shape for them. Sad Clown disease was at its height, YHC couldn’t play a game of Parents vs Kids soccer with out getting injuring and gasping for air. That was the triggering point, after a second torn calf muscle during the second attempt to do this, (two different occasions within a few months of each other), YHC knew he had to make a life style change OR there would be shortened life span, causing unintended consciences for them when that time came sooner than later.

This leads to some elaboration on “Unintended Conscience” For a good solid 2 years YHC’s fitness/health for the most part improved and there was some friendships developed as well as some accountability. (Not the capital “A” type but just the lower case type). It wasn’t until recently that the real benefits have flourished, this is when YHC realized F3 wasn’t just for YHC or for his M’s and 2.0’s, it was much bigger than this. It was for the other man, the man that is looking for the nudge just like YHC was at the start of this F3 journey. Now realizing that helping that next man grow, develop, and achieve their goals, then watch them as the become that next HIM and start to do the same for another man, that’s the true reward of F3 and’s its true mission.

Now F3 did have a positive impact well before this realization, it’s been giving back to YHC and the family since the start. The realization really hit home though as it was brought more to light how YHC was so focused on the physical results of F3 that he wasn’t really there for the 6, YHC was more worried about getting in the workout YHC though he needed for himself. It took a HIM to hold YHC Accountable and to trigger that realization, something was brought up that took courage to say and with out that HIM speaking up YHC may not of ever realized the depth of what was to come next. Thanks owed to our brother Sniper, for having that courage.

YHC is proud of the messages as of late, seems like the true meaning/rewards of F3 are so much more apparent as of late. Mostly from the courage of more HIM speaking up, it’s easy to not say anything it’s much harder to tell the truth, especially when someone else may not want to hear it. Great things have been brewing, like Condenser starting the Q source on Wednesday and all the PAX that attend this and express truly meaningful things. To Ripken firing up an Accountability Challenge, to help us lay out our areas we need help with. Brutus who has challenged our Shield Lock with some deep conversations about our M’s and how we can improve our relationships with her. To Bing who has been that guy constantly willing to pick me up and bring me to that “I’m not a runner Ft Hammer AO” and teach YHC it’s really about the camaraderie. To smaller things like Spinal Tap dropping a message about positivity, and how we all need to focus on that more in his BB from Tuesday, Goob and is BB just yesterday calling out what the real meaning of Failure is.

I am honored to be amongst so many great HIM, even more honored to watch as more HIM are in the making. We have something special, never forget that. There is a balance of what’s too much or not enough yet we all need the be held Accountable. (with a capital A). There are many other names, too many to list, of HIM that have and are doing this every single Gloom, keep up the great work brothers!

To finish this off, since this was a Cycling AO BB, please do not let your own mindset of what your pace needs to be as a limiting factor to NOT post. (This goes for any running AO’s as well) This group of HIM is strong and a Pincher promise, No man will be left behind, but leave no man where we find him. Shout out to Lonestar for coming out this gloom, great work, it was a pleasure to ride with you. Looking forward to seeing his return and many more on these two wheel exercise machines in the future.