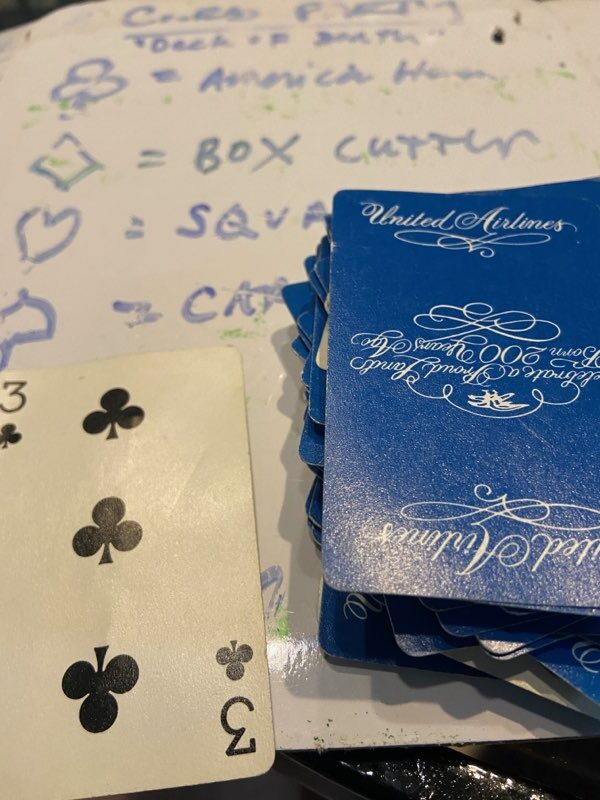 Saturday was the big day for the Bridge A Life Superhero 5K at Benderson, and numerous pax were running, and Gridlock and M were leading. But there were still a few of us who could not be there, and came out for an hour-long card party at Adventure Park. Lucky for us, we had two new pax.

The workout began with a mozy to the dog walk bridge, and a few exercises in the parking lot. Smurf did not have patience for much of this, and headed back to the field.

The main event was a 54 card, or so, deck from United Airlines. The deck has been used numerous times at F3 Suncoast events. The blue cards, which celebrate the nation’s Bicentennial, have a sort of patina. The patina has been burnished by a few outings.

In this case, each of the suits had a connected exercise. The group would do the exercises in unison, with one person calling out the card, and the number. In this case Clubs=American Hammer, Diamonds=Box Cutters, Hearts=Squats and Spades=Carolina Drydocks. That took up a goodly amount of time. It was broken up by quick suicides in the field.

The group also managed a Dora, which some managed to figure out after we grouped in twos.

The wind was high, and the cards flew, rescued by pax. The deck of United cards, which perhaps first flew in a DC-8 back in 1976, were saved for another day.

In the Name-a-rama, we welcomed Clifford and Raid.

Prayers for foster children in Manatee and Sarasota, and cud chewer.