The mission of F3 is to plant, grow and serve small workout groups for the invigoration of male community leadership.

After a nice pre-run (3 miles, fellowship pace) with Gridlock and and FNG (Shamrock) we went though a nice beatdown and benefited from sharing 1 hour with other HIM. This was so worth it!

Warm Up: The pax may be feeling those hip flexors tomorrow.

Finished with some nice running to the fence and back to work on proper running mechanics.

Prayers for those pax members going through multiple struggles physical, mental, and/or emotional. Prayers for Bing’s sister (Deborah) so she has a full and speedy recovery.

Praise for the HIM in our group who push each other to make us better. Praise for those pax member healing and are able to come back to the beatdowns. And praise for 8-Ball whose labs workups came back normal.

Weather: perfect day for a beatdown. Temps in mid-40s with some nice wind from the North. Dew Point in the low-40s was a welcomed change.

Pre-run: YHC and Bing set-out on a 6-mile pre-run that became a 6.5-mile pre-run that meandered through the normal Greenbrook–70–Lorraine loop, but then took a surprising turn for the sinister as the journey extended south on Lorraine where the cows hideout and no streetlights exist. It was cold, it was dark, it was windy, it was monotonous, but the conversation was good. So we ran, and ran fast toward the end. Bing promised to retreat to fartsack upon return to parking lot, but that desire quickly fell victim to what was to come.

Welcome: at exactly 0515, YHC greeted the obviously cold pax. Hands were rubbing together and jackets, hats and gloves were the accessories of the morning. The 5 core principles were recited, the disclaimer vocalized and away we went for a two-lap mosey that included high knees, lateral shuffles, nur, butt-kickers and skips. The pain that was to come begged for the legs to be stretched and warm.

CoP: After the mosey, the pax grabbed their beverages and headed to the basketball courts where the wind was howling and the ground was cold. The pax circled-up and YHC led the group in the following:

The Thang: With the NFL Combine getting plenty of TV time these days, YHC cooked-up a cardio-based HIIT (High Intensity Interval Training) session for the pax. The actual NFL Combine consists of 6 events:

These events were modified for F3 purposes into the following:

YHC explained the events some pax might not be familiar with. The 3-cone drill is an explosive assessment drill where the athlete begins in a 3-point stance, bursts forward 5-yards and touches the ground with the hand and returns back to the start touching the hand to the ground again. Then the athlete bursts to the 5-yard mark again, but this time makes a hard right turn and accelerated another 5-yards and turns back around back to the 5-yard spot making a hard left turn, returning to the original starting spot (think a big, inverted “L” shaped suicide type thing).

The other event others didn’t really know much about was the shuttle run. This event begins with the athlete at mid-court facing a sideline and in a 3-point stance. The athlete quickly accelerates to the right until reaching the 3-point line and touches ground with the hand, sprints back to the other side of the court, touching the ground at the other 3-point line, then turns back around and races to the mid-court where he started (aka, 5 yards right, 10 yards left, 5 yards right or 5-10-5).

After a quick demonstration by YHC, all seemed on the same page. The remainder of the beatdown was 4 sets of the 6 exercises conducted in 60-second bursts followed by 20-seconds rest. Once all six exercises were complete, pax earned a well-deserved 60-second break. Rinse-repeat for 4 sets.

The action was fierce, especially on the first 3-cone exercise — there were pax everywhere — lucky someone didn’t get trampled. YHC nearly took-out (or got taken out) by no less than Gator, Sniper, pincher and Goob. After the first cluster, the pax learned quickly and gave themselves much more room when partaking of the subsequent 3-cone exercises.

YHC logged nearly 1.5-miles of running during the beatdown, albeit slow! The Hurleys and broad jumps ended-up back-to-back thanks to YHC’s HIIT timer randomly selecting that brutal combination. The first set sent my glutes and quads into shock!

All survived and all got stronger. After the beatdown, pax returned to the parking lot for count-o-rama and name-o-rama. In all, 15 men braved the cold, wind and gloom to get better and grow deeper in fellowship. That’s a high draft pick all day long, regardless of F3 combine results!

YHC is thankful for the opportunity to Q a great group of men.

With the Pre-Q runner’s out of pocket the parking lot looked empty as I rolled in at 5am. You know it is a good thing when the initial discussion was it looked like it was a light morning for the PAX members and 10 is now consider a LIGHT morning 🙂

We Mosy’d around the parking lot twice doing some high knee’s , Karaoke’s and Nur’s.

Circle up do to 14 SSH’s, 7 Strawberry Pickers and 14 Windmill’s…. the number 7 was going to be our nemesis today.

The exercise’s would be done in each corner of the fenced in area.

1st Round of 7’s in each corner Burpee’s

2nd round of 14 in each corner Big Boy Sit Ups

3rd round of 21 in each corner Flutter’s

4th round of 28 in each corner Freddy Mercuries

7th round of 28 in each corner Freddy Mercuries

8th round of 21 in each corner Flutter’s

9th  round of 14 in each corner Big Boy Sit Ups

Prayers for those PAX members that are hurting both physically and emotionally or just need to get out of the fartsack and join us again.

Weather: 60’s and wet, but no rain during the beatdown.

Humpday has arrived, and it was time to get to work.  4 pre-runners arrived, yet two never left the parking lot.  This wasn’t due to being lazy, Gridlock and Big Mac decided humpday meant repeat 400’s in the parking lot, so they ran hotlaps for 45 minutes at an impressive breakneck speed.  YHC and Ripken took off for our usual 5-miler at fellowship pace where we solved the worlds problems with intermittent fasting and discussions on travel baseball and soccer politics.

One would think that the wet conditions and light rain showers would keep the pax in the fartsack…NOPE! Not HIM of F3 Nation.  15 with an FNG would appear for a borrowed beatdown by a nemesis of the Suncoast.  But first for the warm up.  Usual two laps including butt kickers, high knees, nur, carioca x2 and some toy soldiers.  Once we circled up for COP, we didn’t wait long to get down on the ground and embrace the wet (sorry Barron, the sweatshirt used to be white).

Enough of the warm ups, it was time to hit the streets.  After using one of my Q Prep lifelines of text a Pax, Longshanks shared his weinke from the day prior.  Longshanks has a history of making friends at beatdowns, sarcastically.  He has a history of receiving the finger once or twice from the Suncoast, even before he ever visited and left his mark!  It was time for a lamp post beatdown including the following:  5 Lamp posts along Greenbrook Blvd, about 100m apart from one another.  Perform a set of exercises at each post. The sets included the following:

The pax battled through a great beatdown, and I am honored to lead this group.

An honor as always!  Welcome to Posh!  Sorry for the nickname – blame Mr Clean.

F3 workouts are supposed to get you in shape and discourage you from eating tasty, high-calorie food. Luckily, that’s more of a suggestion and not a core principle, so like pass interference in the NFL playoffs, it’s loosely enforced.

We started with a 2-lap mozi around the parking lot that included high knees, butt kickers, carioca x2, and nur. We then circled up for a COP with side straddle hops, imperial walkers, strawberry pickers, Moroccan nightclubs, and windmills. It was then time to head over to the basketball courts for the big thang.

YHC explained that yesterday was a huge day for Lakewood Ranch with the opening of its very own Skyline Chili on Lakewood Ranch Boulevard. Anyone who goes to college in Cincinnati gets indoctrinated into Skyline pretty fast, and I can tell you from personal experience that you haven’t lived until you’ve done the double play of closing Uncle Woody’s at 2.30am and then closing the Skyline near the UC campus at 4.00 (pictured below). 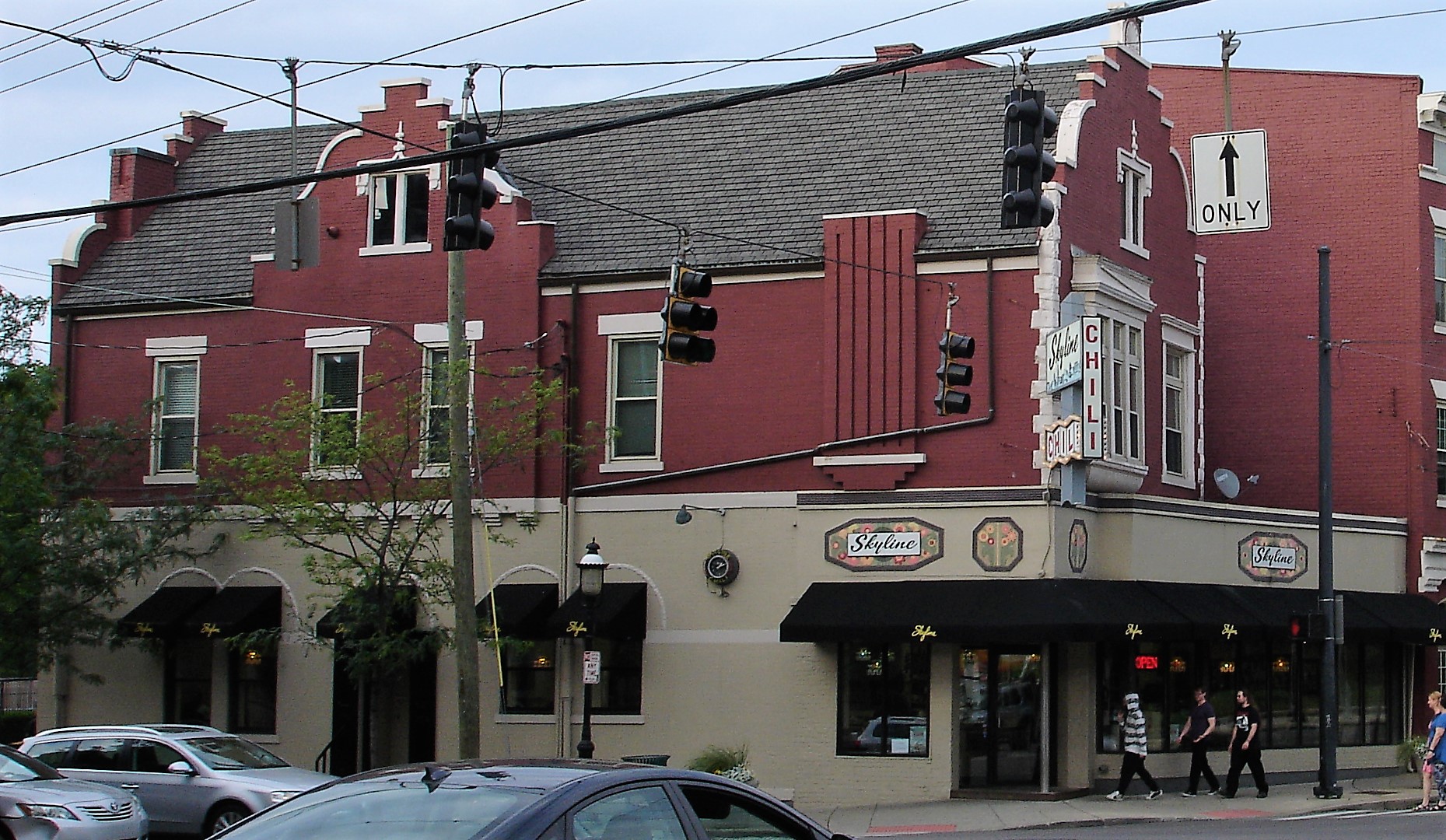 Skyline’s most famous dish is the 3-way, which is a plate of spaghetti topped with chili and cheddar cheese. Keeping with that theme, several exercises were organized into groups of 3. Do a set of the first exercises on the baseline, go to the center line and do the 2nd set of exercises, go to the other baseline and do the 3rd set. Then go back to the center line and do the 2nd exercise again, and back to the baseline where we started for another set of the 1st exercise. To make it better, because Scrum went to high school in Cincinnati and is just as excited about the opening of the Skyline, modes of transportation were mostly based on his extremely popular Fun with Animals theme (sorry, but that’s gotten to the point where it deserves to be capitalized). Here was the setup:

Bonus set (40 reps at each station)

A couple of minutes were left for a Round of Mary, in which we did box cutters and V-ups.

BONUS POST-BEATDOWN ANNOUNCEMENT: In light of today’s workout, we are organizing an emergency 2nd F event, lunch at Skyline on February 14. Yes, it’s Valentine’s Day, but the date was Ripken’s idea so please direct all complaints his way. Bing has set up an event notice on Mumble Chatter. I will hopefully have achieved Norm from Cheers status at the place by then.

The mission of F3 is to plant, grow and serve small workout groups for the invigoration of male community leadership.